America’s own ghost town. The town that never stops burning!

Most people have heard of the city that never sleeps or the windy city but not many know of the town that never stops burning.

Nestled in the American countryside, lays Centralia, Pennsylvania, the town that has been burning for 55 years now. Oddly this abandoned town has become a tourist destination for thrill seekers and curious people, alike. why not? It’s not every day one gets to visit the pits of hell, right?

Centralia, known by many nicknames, such as the pit of hell, is an interesting and creepy location. The streets and building are riddled with graffiti. Large, gaping cracks blowing toxic steam and smoke into the surrounding air.

There are signs when entering this town, and throughout, warning visitors of death by asphyxiation and the possibility of being swallowed by the ground below you. The few who do brave through the warning signs and visually obvious danger is nothing short of fearless people. 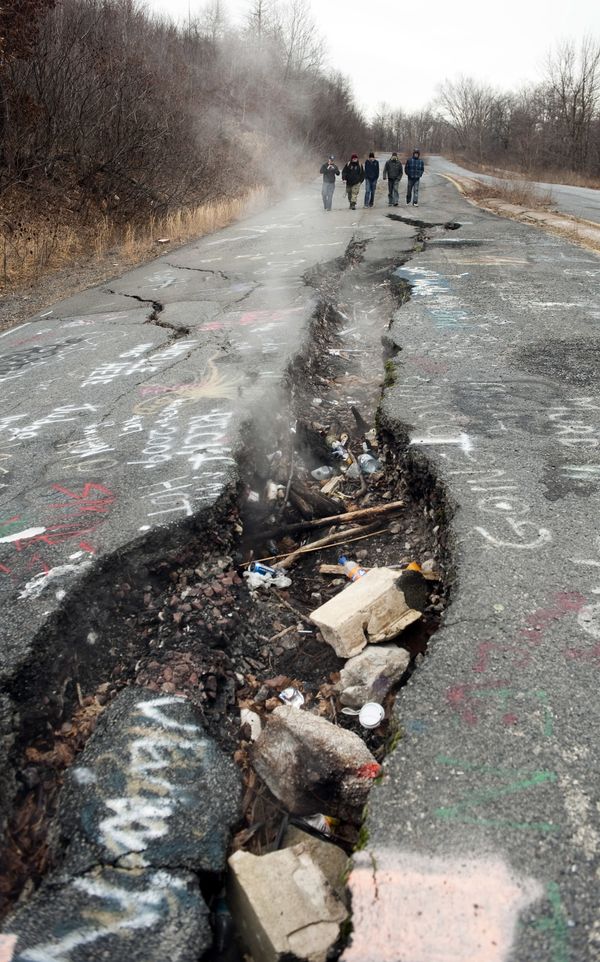 This all began on labor day, 1962 and is expected to continue to burn for another 250 years. The fire was intentionally set, by firefighters, who wanted to burn trash in a landfill. No one took into consideration or perhaps knew, that below the heaping pile was a vast network of mines, no longer in service from it prime coal-mining days.

Because the inferno was underground, it has been impossible to irradiate. Locals were able to extinguish the surface level fires temporarily but the smoldering fire below, as well as the building carbon-monoxide and sulfur fumes, made it impossible to live there.

Roads in the town are cracked from the fire at 300 feet underneath and burning eight miles wide. While playgrounds left abandoned for decades really make the town look like a level of the game ‘Silent Hill’. Most residents finally left in the 1980’s

As said in this video the underground furnace continues to grow about 75 feet per year, yet the last attempt to put it out was sometime in the 1980’s. Probably around the time the majority it’s residents retreated. Back in 1981, a 12-year-old boy fell into a sinkhole that formed in his grandmother’s yard. The only thing that saved the young boy, from succumbing to this pit that nightmares are made of, he got caught up on some tree roots. That’s right.

“Through a monumental series of blunders and inadequate attention over the years, it got to the size underground where it basically destroyed the town of Centralia and everybody had to move,” Davod Dekok, a Pennsylvania historian, told the Associated Press in the video below on the occasion of the fire’s 50th anniversary in 2012.

The fire was so widespread, destructive and unending ― it’s said that there’s enough coal underground to fuel the fire for another 250 years ― that in 1980, a $42 million relocation plan incentivized most of the townspeople to relocate (most of the homes were demolished), leaving only about a dozen holdouts behind.

The Smithsonian describes it bleakly:

Today Centralia exists only as an eerie grid of streets, its driveways disappearing into vacant lots. Remains of a picket fence here, a chair spindle there ― plus [John] Lokitis and 11 others who refused to leave, the occupants of a dozen scattered structures.

Over the decades, the ground has opened up with sulfurous gases sometimes billowing out ― the road along Highway 61 swells and cracks open, rife with graffiti and hot to the touch. In the winter, snow melts in patches where the ground is warm.

Below is a creepy video of a drone areal view.

So what do you think? Would you visit this place? Let us know in the comments.

Father In Need Of Kidney Finds Donor In An Unexpected Place

Young Man’s Gift To His Grandfather Brings Him To Tears

WATCH! Kids At Puerto Rico school CHEER as power is restored after 112 days

3rd grade cancer survivor gets the SURPRISE of a lifetime from her classmates!